I suppose when I married into the “Dove” family, I could have expected that “birds” (especially Doves) would somehow have a special place in my life.  Granted I am not a real fan of caged birds per se.  When I was a child in the mid 60’s my parents inherited an Amazonian Parrot that we affectionately called Gomer.  We inherited this bird after we befriended some sailors from a Danish freighter that had run into another freighter just off the west coast of Vancouver Island.  The call went out to all Danish-speaking citizens in the Victoria area to host these sailors while their ship was undergoing repairs.  Mom and Dad answered the call and for several weeks we became the adopted family to three burly Danish sailors who had the most colourful tattoos I had ever seen, and the most colourful Danish language too!  They spent their time with us, eating…a lot…(did I mention they were burly?) and watching wrestling matches on our T.V.  One day they showed up with Gomer after the Danish cook on their ship had taken a vicious disliking to the birds squawking all day at him while he was preparing the meals.  He had already dispatched Gomer’s mate with a butcher knife and was threatening to behead Gomer before the sailors rescued him.  We discovered quickly that Gomer’s squawking was definitely something to get used to but my mother had endless patience with the bird and eventually trained him to speak several polite English words and not repeat the “colourful” words he had learned while on board the Danish ship.  (No doubt he must have learned some of those words from the cook brandishing a butc 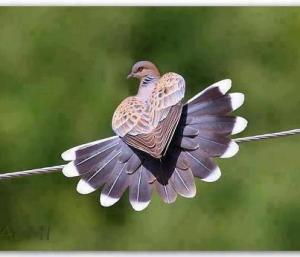 her knife.  Hehehe.)  Anyway, Gomer became part of our family, and we one day discovered he had a penchant for red wine after my cousin mistakenly allowed Gomer to lick what we thought was Red Cherry Soda from his fingers after a family dinner.  We only discovered the mistake when the bird hung upside down in his cage for an hour and sang Danish drinking songs before keeling off his perch to sleep off the hangover.

My next brush with feathers was the summer my daughter (a middle-schooler then) begged me to look after the school’s two Cockatiels.  (I should have remembered what happened the summer we looked after the preschool’s hamster, but that’s another story.)  The two birds shared a huge cage together and between the two of them kicked out enough feathers to fill a king-size duvet!  They didn’t much like people, or at least me, because every time I went near the cage to clean it or give them food or water, they attacked my outstretched arms and fingers with vigor.  I made the mistake of not closing the latch on the cage door properly one day and we spent hours chasing them around the house while they dive bombed and pooped on us as they flew past.  (I seriously considered getting out my butcher knife!)

Several summers ago while camping with my family, I witnessed a “bird drama” unfold on Mirror Lake near Kaslo B.C.  The lake is home to a family of ducks, but this particular summer a confused Canada Goose had somehow become adopted by the ducks.  When they quacked, he honked!  When they waddled up to the campsites to beg for food from campers, the goose followed along contentedly.  For days I watched as the ducks and goose interacted.  They certainly seemed to have a special camaraderie.  One morning a gaggle of geese descended with great trumpeting and fanfare onto the lake.  Ducks scattered as the great geese splashed down and honked noisily to each other.  It only took minutes for the other geese to notice the lone goose that had spent his summer with the ducks.  I don’t speak “goose” but it was pretty obvious that the jist of the conversation had to have been in the form of “goose bullying” – “Are you kidding me?  Whatcha doing hangin’ around with those ducks?”  Pretty soon the lone goose, feeling shamed I suppose, left his duck friends to swim with his new goose friends.  Minutes later, I watched in amazement as the geese lifted off as a group and with a final splash good-bye to his duck friends, the lone goose joined his geese friends in the sky.  They circled the lake once and then headed south and I did not see them again.

I often have wondered if the ducks missed the goose or vice versa.  For the longest time I was sure that birds were totally incapable of showing any kind of “human” emotion until last week when I witnessed another “bird drama”.

Two black birds, a male and a female, were chasing each other noisily around the house.  I knew this, because our dog, Samson, whenever he sees a bird outside, loves to chase them from one window to the next from inside the house, barking madly at them the whole time.  This time, though, his barking stopped abruptly when the female bird banged off the back window and landed with a thud on our back deck.  I knew the sound, birds sometimes careen into those windows and the outcome is much the same each time.  They usually don’t survive.  Sure enough, the little bird’s neck was broken.

I am always saddened when something like that happens, but living on an acreage, sometimes animals and civilization collide.  I knew that by days end a fox, coyote or hawk would take the carcass of the bird as an easy meal.  It was nature’s way.  I shooed Samson from the window and went back to wash some dishes but then I noticed something.  The male mate of the deceased bird was pacing beside the body.  A few times he would lift off and circle and then light back down and pace again.  He flew off and was gone several minutes and when I looked again, he had a worm in his beak and was trying to feed the worm to his mate, in hopes it would somehow revive her.

I must admit as that heartbreaking scene unfolded, I got choked up.  I had never thought birds could “love” one another, but it was obvious that I was witnessing a great display of affection here.  When the male realized that his “beloved” was gone, he left the worm like a farewell offering by her and flew off.  As I knew would happen, sometime over the course of the next few hours, while I was not watching the carcass of the bird was mysteriously removed from the deck by either a bird of prey or some other scavenger.

Now you might think that is the end to the “bird drama” but that night I had a hard time sleeping in the next morning because at first light, a little black bird kept dropping rocks on our sloped roof, over our bedroom.  I had seen the bird fly repeatedly over our room through the skylight and though the rocks were small they made enough noise as they skipped along the shakes to annoy me enough so I couldn’t sleep.  It was obvious that the little male bird had tried to enact some kind of revenge on the monster (our house) that he had perceived murdered his mate.  Like a little “Rambo” he had attacked with vengeance.  I can’t help but think that every time he dropped a rock on our roof he thought, “Take that, Monster!  This one is for the Missus!”

I find it interesting that all through scripture, birds (ravens, sparrows, eagles, doves etc.) are mentioned, not as a way of teaching us some factual information about them, but presented to us in the Bible on the basis of lessons that certain individuals learned from watching birds.  For example, the eagle is mentioned twenty-eight times in the Bible.   Twenty-six of those times, it is mentioned as teaching some kind of lesson.

Job 12: 7-12  “But ask the animals, and they will teach you, or the birds of the air, and they will tell you; or speak to the earth, and it will teach you, or let the fish of the sea inform you.  Which of these does not know that the hand of the Lord has done this?  In his hand is the life of every creature and the breath of all mankind.  Does not the ear test words or the tongue taste food?  Is not wisdom found among the aged?  Does not long life bring understanding?”

Scripture says that God watches over each one of His creation including a “sparrow” (Matthew 10:29-31).  The Hebrew word for sparrow  simply means “a very small bird.”  The idea here is that if God watches over the tiniest of birds and even knows when one falls from the sky, how much more is He aware of his children who are “worth more than many sparrows”? (vs.31)

I read somewhere that “there is never a sparrow dies but that God goes to its funeral”.  How tender-spirited is the Lord, that He cares so much for the smallest of birds?  Did the tears well up in His eyes, as they did in mine, when He watched the Black Bird mourn the loss of his mate?  Does God care that much for a bird?  Scripture says He does!  How much more does He love me, a “Dove” by name, a bird-watcher at times, “bird-brained” occasionally, just ask my kids 🙂 , but mostly just an ordinary woman journeying through life daily with God?

Let’s be encouraged today, my friends.  God has a “bird’s eye view” of us!