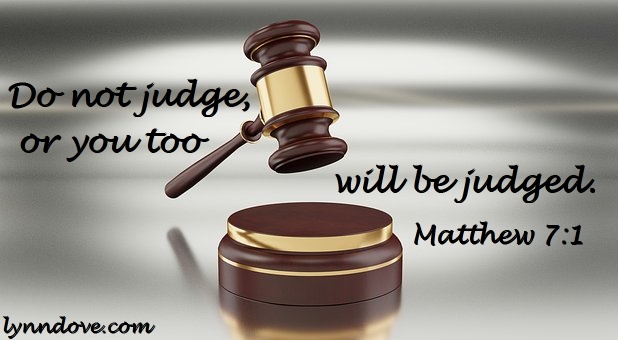 “Judge not, lest you be judged.” he said somewhat proudly, and lit a cannabis cigarette.  The news report continued to show various people in our nation’s capital lighting up to celebrate the legalization of pot in Canada today.  I just shook my head and changed the channel.

Matthew 7:1 will likely be quoted many more times in the days, weeks and months ahead as Canadians negotiate the highs (pardon the pun), and lows of what the legalization of marijuana in this country will mean for its citizens.  So, for those who feel the need to quote scripture to defend their stance for or against the use of pot, let’s just ensure we’re using this misinterpreted verse correctly, shall we?

Matthew 7:1 is one of the most frequently misused verses often declaring in its premise that Jesus told us not to judge.  Since we are all sinners, who of us have the right to cast the first stone, or judge someone else?  Verse 1 is often used to defend against pointing out a person’s wrongdoing, but if we dive further into the context of this passage, Jesus is not forbidding judgement but is pointing out the hypocrisy in those who improperly judge.

Merriam Webster defines “hypocrisy” as: a feigning to be what one is not or to believe what one does not : behavior that contradicts what one claims to believe or feel.  In this case Jesus is rebuking the hypocrisy of the Pharisees who were quick to point out the sins of others but were unwilling themselves to be held accountable to the same standards they insisted on imposing on others.

“Do not judge, or you too will be judged.  For in the same way you judge others, you will be judged, and with the measure you use, it will be measured to you.  “Why do you look at the speck of sawdust in your brother’s eye and pay no attention to the plank in your won eye?  How can you say to your brother, ‘Let me take the speck out of your eye,’ when all the time there is a plank in your own eye?  You hypocrite, first take the plank out of your own eye, and then you will see clearly to remove the speck from your brother’s eye.”  Matthew 7:1-5

My father had a saying when I was growing up: “Don’t do as I do, do as I tell you.”  My Dad did not want my brother and I to make the same mistakes he made when he was growing up.  He wanted to shield us from the heartache of making poor decisions.  It was particularly confusing when he told us to not do something, when he was at the same time doing the thing he was telling us not to do.  For example, we were told that smoking was bad for us and we should never smoke, yet he and my mother both smoked.

Christians have a hard time with Matthew 7:1.  It’s easier to let things pass by and say, “Who am I to judge?” because we are fearful that we will be labeled hypocrites if our own sins are found out.  So the question remains, should we judge at all?  Scripture tells us that believers are to judge – but to do so in a righteous manner.

I read a commentary recently with regards to the “plank” and “speck” in someone’s eye.  I found the analogy quite eye-opening, literally!  The closer an object gets to the eye, the larger it appears – a tiny splinter from a distance is log-sized if embedded in one’s eye.  So a fault or sin in one’s own life is a far greater problem than the same fault in another person’s life.  So Jesus is stating quite clearly in Matthew 7:3-4 that removing the obstruction or “plank” from your own eye is vital before you can righteously judge someone else.

Merriam Webster defines “righteousness” as: acting in accord with divine or moral law: free from guilt or sin.  Several Bible verses show that a righteous person (one who does not conform to the world any longer but strives to follow God wholeheartedly), can make a righteous judgement.  Paul tells us to “Preach the word; be prepared in season and out of season; correct, rebuke and encourage—with great patience and careful instruction.  For the time will come when people will not put up with sound doctrine. Instead, to suit their own desires, they will gather around them a great number of teachers to say what their itching ears want to hear.”  2 Timothy 4:2-3

Christians are commanded to make decisions, to discern between good and bad or to establish what is good and best.  In other words, the ability to think with discernment is synonymous with an ability to think biblically.  John Calvin says that one “who judges according to the Word and law of the Lord, and forms his judgment by the rule of charity, always begins with subjecting himself to examination, and preserves a proper medium and order in his judgments.”  Christians can make judgments without hypocrisy if we live a life surrendered to God, repentant and humble before Him.