The Father Turns His Face Away? 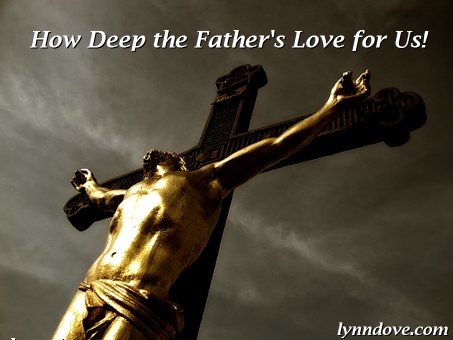 We sang the song, “How Deep the Father’s Love For Us” again in church this past Sunday. I really love the tune and the sentiment of Stuart Townend’s worship song, but I used to cringe every time we came to one line in the song:

“How great the pain of searing loss
The Father turns His face away
As wounds which mar the Chosen One
Bring many sons to glory.”

“The Father turns His face away.” That line grated on me every time I sang it because I just didn’t think it was possible for God the Father to turn his face away from his beloved Son.  The Cross was the culmination of God’s Plan to redeem the entire world.  It seemed unimaginable that God would turn his back on His Son at such a crucial point in history.  It just didn’t line up for me theologically.

I’ve been immersed in Psalm 22 this last week leading up to Easter.  It is a Psalm of David and must be read in context for a full understanding of its message and meaning.  Certainly in Jesus’ time, this Psalm would be well known and likely memorized and sang in synagogue.  Chances are the people of the time may have thought it referred to trials David was personally experiencing in his life time.  We have the benefit of knowing it was a prophetic telling of the Passion of Christ, and Jesus, as He hung on the Cross quoted the first line of that Psalm, “My God, my God, why have you forsaken me?”  It is perhaps this line that inspired Townend to pen the line in his song, “the Father turns His face away.”

It is a confusing statement in many ways.  Did Jesus actually think that God the Father had forsaken or abandoned Him on the Cross?  No, not at all!  It goes contrary to God’s nature to “turn his face away” from his beloved Son at a time when Jesus had been obedient to the will of His Father throughout His entire life, including going to the Cross.

Several Scripture references give credence to the fact that God the Father was “well-pleased” with his Son, so that indicates to me that God could not and would not abandon his Son or turn his face away from Him.

Matthew 17:5  “While he was still speaking, a bright cloud covered them, and a voice from the cloud said, “This is my Son, whom I love; with him I am well pleased. Listen to him!”

Matthew 12:18  ““Here is my servant whom I have chosen, the one I love, in whom I delight; I will put my Spirit on him, and he will proclaim justice to the nations.”

2 Peter 1:17  “He received honor and glory from God the Father when the voice came to him from the Majestic Glory, saying, “This is my Son, whom I love; with him I am well pleased.”

It is vital to note that the sacrifice on the Cross was all God’s idea.  It was his intention from creation forward to offer up his Son as the only One Who could take away the sin of the world.  Jesus was fully aware of that plan and willingly offered Himself up as the perfect Sacrifice.

Acts 2:22-23  ““Fellow Israelites, listen to this: Jesus of Nazareth was a man accredited by God to you by miracles, wonders and signs, which God did among you through him, as you yourselves know. This man was handed over to you by God’s deliberate plan and foreknowledge; and you, with the help of wicked men, put him to death by nailing him to the cross.”

John 8:28-29  “So Jesus said, “When you have lifted up the Son of Man, then you will know that I am he and that I do nothing on my own but speak just what the Father has taught me. The one who sent me is with me; he has not left me alone, for I always do what pleases him.”

Philippians 2:8  “And being found in appearance as a man, he humbled himself by becoming obedient to death—even death on a cross!”

Ephesians 5:1-2  “Follow God’s example, therefore, as dearly loved children 2 and walk in the way of love, just as Christ loved us and gave himself up for us as a fragrant offering and sacrifice to God.”

Lastly, if we get really theological about this, a Triune God is incapable of separating himself from himself.  Confused?  The Baptist Faith and Message  clearly explains the Trinity: “The eternal triune God reveals Himself to us as Father, Son, and Holy Spirit, with distinct personal attributes, but without division of nature, essence, or being.”

John 5:20  “For the Father loves the Son and shows him all he does. Yes, and he will show him even greater works than these, so that you will be amazed.”

Matthew 29:19-20  “Therefore go and make disciples of all nations, baptizing them in the name of the Father and of the Son and of the Holy Spirit, and teaching them to obey everything I have commanded you. And surely I am with you always, to the very end of the age.”

I think when Jesus cried out from the cross, “”My God, my God, why have you forsaken me?” He was quoting directly from Psalm 22.  That makes sense to me.  He wasn’t claiming He was abandoned by God!  That’s ludicrous.  Instead, He was quoting from Scripture something He did repeatedly throughout His entire life.  That seems true to His character.  However, weak from the brutality inflicted upon His earthly body when He was crucified, He may not have had the physical strength to recite any more than that first line.  It was highly likely that was all He needed to say because His followers would have known and memorized that Psalm.  The meaning would have been perfectly clear.  The Father did not turn his face away instead verse 24 clearly states:

“For he has not despised or scorned the suffering of the afflicted one; he has not hidden his face from him but has listened to his cry for help.”

I challenge you this week to read Psalm 22 as you prepare yourself and your household for this Easter weekend.  I know you will find it as impacting as I have this week.

“For God so loved the world that he gave his one and only Son, that whoever believes in him shall not perish but have eternal life. For God did not send his Son into the world to condemn the world, but to save the world through him.”  John 3:16-17

(For your reading pleasure, I also recommend this article I wrote for InScribe this week: “The Passion Through John’s Eyes“)

Like Loading...
This entry was posted in Proverbs 16:9 - Journey Thoughts, Scripture Study and tagged bgbg2, Did God turn his face away from Jesus?, Easter, How Deep the Father's Love For Us, Matthew 12:18, Matthew 17:5, Psalm 22, Scripture, Stuart Townend, The Passion. Bookmark the permalink.

1 Response to The Father Turns His Face Away?