Parenting 101 – Is Your Child Being Bullied? 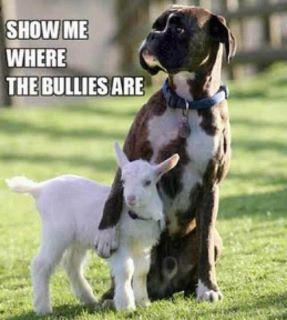 Another horrible school shooting in Ohio reminds us that the subject of “bullying” refuses to go away.  A young man, described as a loner and a boy who some suspect had been bullied, went on a shooting spree at his school and gunned down several students in the cafeteria.  It’s a tragedy that in my opinion could have been prevented.  The young man voiced his frustrations and his anger on his Facebook page and even said that he hoped his classmates would “die”.  Why did no one listen to him?  We pray for the families who have suffered such loss this week.

I have three very unique, very different children.  I am constantly amazed by them!  Certainly there have been times  that I (and they) have questioned my sanity…or lack thereof…in trying to parent these children but for the most part I wouldn’t trade a minute of it!

My daughter Laurelle is now a grown, married woman, a wonderful mother to my grandson, Jaxon.  She is a phenomenal young woman with a passion for teaching.  I had no idea when we signed her up in kindergarten french immersion way back when, that one day she would be teaching french immersion kindergarten!  How did that happen?  God had a plan and a purpose for her for today but the journey started the day she was born.  Who knew?  God did.

I remember that little girl learning to ride a bike.  She fell off that thing more than she stayed on.  At one point, after crashing once again to the pavement, she picked herself up and in tears kicked the seat with all her might announcing to her father that she would never learn to ride a bike!  It’s hard for a parent to watch their children struggle, but it’s also a time to instill a value, “Don’t give up!  Don’t quit!”  her Dad said, and taking her by the hand, straightened her helmet, and plunked her back on the bike.  “You can do it!”  he said and with a push, he sent her on her way again.  Yes, she wobbled and yes she even fell off a few more times but eventually her perseverance paid off and she mastered bike riding.  It was hard but she didn’t quit.

In grade seven, Laurelle became the victim of bullying.  It was the worst time of our lives.  She had become the primary target of some malicious girls at her school who took great pleasure in undermining everything about her.  They called her degrading names; called her stupid, and maligned her every chance they could.  They tripped her, pushed her into her locker and laughed at her.  Her marks plummeted, she started to look sickly and pale.  She started to dress in sombre colours and she rarely smiled.  She had few friends and at one point she wanted to die.  Her father and I tried to question her about school but she was tight-lipped and was a good enough actress at home to make us believe that everything was okay.  We had no idea how serious the bullying situation had become until her piano teacher, who was also a close personal friend, called me and said that Laurelle had confided to her in the middle of her piano lesson that she was thinking thoughts of suicide.  In horror and in panic, I ransacked her room looking for anything that she might use to hurt herself, instead I found her diary.

As a parent, you make split second decisions some times.  In this case to save her life was much more important than respecting her privacy.  I didn’t hesitate.  Page after page of heart wrenching pain was written in her handwriting.  I wept with grief over what my child was going through at school, things she had never shared with us.  When I confronted her later about it, she was horrified I had read her most private thoughts.  I had betrayed her trust.  I didn’t apologize for that.  I wished I had done it sooner.

For a day or two, Laurelle was more angry with me than she was at the bullies at school.  I was okay with that.  Now that I knew what was really going on in her life I could come alongside her and help, even though she rejected that at first.  We immediately contacted the school, set up meetings with the school counsellor, her teachers, and the principal and we elicited prayer support from our church family.  Over the next several weeks, everywhere Laurelle turned she heard, “Don’t give up!  Don’t quit!”    God placed people in her life that supported her, encouraged her, and loved her.  Bullying had caused her to lose hope.  She felt alone and afraid.  Now she was surrounded by people who wanted to help her.  She wasn’t alone and it gave her hope.

Laurelle’s school counsellor, a precious young woman, told Laurelle to journal her thoughts and her pain to God and to trust Him to help her.  Although I had said much the same thing previously to her, she wasn’t ready to listen to me yet because she was still mad I had invaded her privacy, so I praised God when He used another person to speak to her.  It was truly a “God thing” because in this particular public school, teachers and counsellors did not give spiritual advice to their students, they were discouraged from doing so in fact, but I believe God gave this woman boldness to speak to Laurelle about embracing her faith in God and it impacted Laurelle at a critical time in her life.  She also gave Laurelle some very practical ways to “stand up” to the bullies at school.

Within several weeks, after rededicating her life back to God and then utilizing the strategies her counsellor had given her to combat the bullies, Laurelle’s confidence came back.  She developed new friendships and her once tiny circle of friends grew.  Eventually her group of friends was much larger than the “bully group” and as such the “safety in numbers” factor cut in.  The bullies lost interest in tormenting her, and on occasion if they tried to intimidate her, she was no longer afraid of telling on them.  She got her “no quit” attitude back and it propelled her through the rest of the year and has remained with her ever since.

A while back I was on Facebook and noticed that one of Laurelle’s Facebook “friends” was one of the girls who had bullied her that fateful year in middle school.  I must admit I was quite surprised to see that Laurelle was actually corresponding back and forth with her quite regularly.  I marveled how God had helped her come to a place in her life where she could forgive and forget so completely.  When I commented about it to her, she just smiled.

Laurelle has had opportunity through the years to share her testimony regarding that bullying experience.  God has given her great sensitivity and compassion towards those young people who are victims of bullying.  She shares how angry she was at me for reading in her diary, but how glad she is that I did.  She shares how God brought people in to her life to help her, to encourage her and to love her at a time when she thought she was all alone.  And lastly she tells them’ “Don’t give up!  Don’t quit!”

It’s the responsibility of every parent, teacher, grandparent, youth leader and Pastor to learn the tell-tale signs of bullying.  If you see the warning signs it is time to act immediately.  Perhaps this tragedy in Ohio would never have happened if someone had just taken seriously the threats posted on a Facebook wall.  Kids are being bullied to death…they either take their own lives or they take the lives of others.  It’s an epidemic that must stop.

For more information about bullying and ways to stand up to bullying, please go to www.bullying.org  My books are resources on the website.