How Many People Can I Offend Today?

After the recent debacle of the Canadian quartet, Tenors at the MLB All Star Game, that saw a rogue, “lone wolf” member change the lyrics of our beloved National Anthem to make what he says is NOT a “political statement”, but the entire country would disagree with that….

…I am moved to post what will likely be my most controversial blog response ever.

The what-was-he-thinking-Tenor, not only offended all Canadians by changing the lyrics of our National Anthem, he also offended an entire “Black Lives Matter” movement in the U.S. that has grown in recent weeks after police officers were filmed manhandling and then shooting black men they were trying to subdue.  I am not here to comment on the actions of police officers in these shootings.  The subsequent gunning down of five upstanding, white officers in Dallas, assassinated for all intents and purposes, as retribution for the two shootings by police days before, is an act of terrorism – plain and simple.

The fact is ALL LIVES MATTER whether they are unborn, born, red, yellow, black or white, male or female.  We’re all precious in God’s sight, but desecrating our Canadian National Anthem to state the obvious is not the way to get the point across.

The heartache lies in the fact that we, as people, made in the image of God, do not see each other as God sees us: His greatest masterpiece of Creation!  We define our worth by how others see us.  We demand respect and admiration for things deserved and undeserved.  We want equality at the expense of others.  We label those with differing views as bigoted or intolerant.  We only see the colour of a man’s skin, the accent in a man’s dialect, and the difference in a man’s culture that will either draw us towards that man or away from that man.  (And I’ve already offended many here by not being “gender neutral” in that statement.)

Our “O’Canada” anthem has taken quite a beating over the past few months with the lyrics being changed from “in all thy sons command” to “in all of us command” (a grammatically disastrous change I might add).  Our anthem changed by well-meaning, but perhaps a little misguided members of parliament so that the words would no longer be offensive to women, but also to those who do not acknowledge a gender.  It shows just how ridiculous our political correctness has taken us.

Being politically correct does not necessarily make you CORRECT!  In fact, political correctness is an outright contradiction to the teachings in scripture.  Have I offended anyone yet?

Yes, all lives matter, but to me God matters more!

As Christians we are not children of this world, but Children of God.  We are to live by His rules, follow His teachings and conform to His standards, not the world’s.  “As a prisoner for the Lord, then, I urge you to live a life worthy of the calling you have received.  Be completely humble and gentle; be patient, bearing with one another in love.  Make every effort to keep the unity of the Spirit through the bond of peace.  There is one body and one Spirit, just as you were called to one hope when you were called; one Lord, one faith, one baptism;  one God and Father of all, who is over all and through all and in all.”  Ephesians 4:1-6

As Christians we are called to cast off our former way of life, which was focused entirely on self, and embrace a life that is centred on God.  “So I tell you this, and insist on it in the Lord, that you must no longer live as the Gentiles do, in the futility of their thinking.  They are darkened in their understanding and separated from the life of God because of the ignorance that is in them due to the hardening of their hearts. Having lost all sensitivity, they have given themselves over to sensuality so as to indulge in every kind of impurity, and they are full of greed.  That, however, is not the way of life you learned when you heard about Christ and were taught in him in accordance with the truth that is in Jesus. You were taught, with regard to your former way of life, to put off your old self, which is being corrupted by its deceitful desires; to be made new in the attitude of your minds; and to put on the new self, created to be like God in true righteousness and holiness.”  Ephesians 4:17-24

As Christians we are to speak the Truth in love, remembering that we are saved by Grace, a grace that must also be extended to all.  “Do not let any unwholesome talk come out of your mouths, but only what is helpful for building others up according to their needs, that it may benefit those who listen.  And do not grieve the Holy Spirit of God, with whom you were sealed for the day of redemption.  Get rid of all bitterness, rage and anger, brawling and slander, along with every form of malice.  Be kind and compassionate to one another, forgiving each other, just as in Christ God forgave you.”  Ephesians 4:29-32

Lastly, as Christians we are not to “grieve the Holy Spirit”.  It is more important for us to live according to the Bible than to compromise our beliefs by being politically correct.

We are united with Christ and must acknowledge His Kingship in our lives.  We are to model our lives after Him!  “Therefore if you have any encouragement from being united with Christ, if any comfort from his love, if any common sharing in the Spirit, if any tenderness and compassion, then make my joy complete by being like-minded, having the same love, being one in spirit and of one mind. Do nothing out of selfish ambition or vain conceit. Rather, in humility value others above yourselves, not looking to your own interests but each of you to the interests of the others.  In your relationships with one another, have the same mindset as Christ Jesus:

Who, being in very nature God, did not consider equality with God something to be used to his own advantage; rather, he made himself nothing by taking the very nature of a servant, being made in human likeness.   And being found in appearance as a man, he humbled himself by becoming obedient to death—even death on a cross!

Therefore God exalted him to the highest place and gave him the name that is above every name, that at the name of Jesus every knee should bow, in heaven and on earth and under the earth, and every tongue acknowledge that Jesus Christ is Lord, to the glory of God the Father.”  Philippians 2:1-11 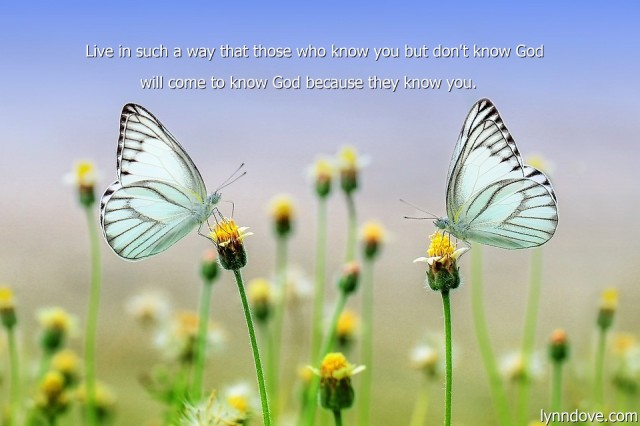 3 Responses to How Many People Can I Offend Today?