I Stand to Show My Respect 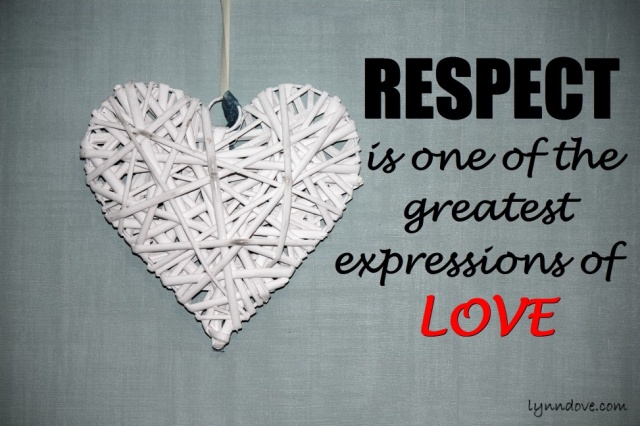 We have lost something very valuable in Canada, and the United States: RESPECT.  We have lost respect on the national political global scene, as well as respect for one another in our own countries.  We do not value each other or the contributions we have made on the world stage or in our own back yards.  Social media allows bullying of the most insidious manner, by famous and infamous name-callers who use the most offensive language to demean, degrade and defame a person(s) on a world-wide scale.  There is no such thing as “freedom of speech” because there is no respect for anyone who has a differing opinion.  Divisiveness abounds in our culture.  Our catch word is “tolerance” but the reality is anything but that.  Hate-filled rhetoric is launched at us from all directions.  Even our world leaders resort to a cacophony of name-calling that is petty and childish.

Many people use a variety of methods to protest against racism, religious persecution and social injustice but this only leads to more denigrating banter between those who agree and those who disagree with the protest.  It all ultimately dissolves into more name-calling and side-show antics that negate the effectiveness of civil protests.  No one wins, everyone is offended, and all civility breaks down.  It all comes down to a profound lack of respect for one another and denying the right of groups or individuals to voice opposing opinions.  This permeates to every facet of our lives and to the way we conduct ourselves daily and interact with our fellow-man.

There used to be a time when RESPECT was learned, not necessarily earned.  That goes counter-culturally to what we think now, that respect is earned.  As children we were taught to respect our elders.  Age and wisdom demanded respect.  We were taught to respect those in authority over us: police, law-enforcement officials, teachers and political leaders.  We didn’t need to agree with everything they did or said, but we respected the “office” they represented.  We respected and honoured our parents and grandparents.  We gave up our seat on a bus or in a gathering so adults and seniors could sit down.  That courtesy also extended to men standing so a woman could sit down.  Chivalry is a thing of the past now.

We stood in respect and silence every Remembrance Day to honour the men and women who fought and died so we might have freedom in our country.  We understood their sacrifice for our nation and honoured them.  Here in Canada today, our war vets struggle to get the medical care they need, or the financial support to live.  It is a national disgrace.

I remember when patriotism included the singing of our National Anthem, and the recitation of The Lord’s Prayer every morning in school.  We honoured both God and country.  In 2017, Canada’s 150th anniversary, most public schools have banned those two exercises as being irrelevant and even offensive in our multi-cultural society.

As faithful church-goers, families in the 50’s and 60’s stood in church when Scripture was read, and everyone dressed in their “Sunday best” outfit to show respect in keeping the Sabbath Holy.  We honoured and respected our Senior Pastor as God’s appointed under-shepherd. We understood the significance of gathering together for Worship.  Now we criticize and complain if services go too long, or the songs are too traditional or too contemporary.  We prioritize our attendance as casually as the way we dress in church.  We critique the sermons and find fault with our brothers and sisters in Christ.  Christian against Christian, we sow disunity amongst ourselves.  We have become so “Seeker Sensitive”, we cater to an audience of the many rather than the Audience of The ONE.

Believer, how big does the “plank in the eye” have to be before we feel compelled to remove it?

What are we teaching our children about respect today?

It’s okay to tear down anything that offends us.  That includes people, things, and ideas.

It’s okay to call the President of the United States a “bum” and hold up a replica of his severed head as a joke on social media.

It’s okay to disrespect the flags and national anthems of our two countries by kneeling instead of standing at sporting events.

It’s okay to bully and name-call those whom we do not agree with.

Am I hitting a nerve yet?

Our two countries were founded on God.  Many would like to negate that now, but go back in history to the writing of the U.S. Constitution and Canada’s Charter, the supremacy of God is not disputed but applauded in both documents!  In our selfish societies, where me-first attitudes pervade every thought we think, we are unable to center our wills around a sovereign God.  It goes against our self-satisfying natures to be controlled in any manner by those in authority over us, be it parents, employers, law-makers, civic, provincial or national leaders, let alone GOD.  It all stems from a serious lack of respect for ANYONE in power.  God is maligned more than ever among secular humanists, who deny His existence or His dominion.  Little to no respect is shown to fellow-man, so it is not surprising that man’s Creator would also be shown little to no respect.  It will be to our own undoing!

So, I am taking a stand.

I am standing up for what I believe in; the values I hold dear.  I want my children and my grandchildren to know that in the midst of all this dissension and lack of respect they see in the world around them today, there are truly things we can STAND up for.  Though the inevitable criticism will come, we can STAND firm knowing our beliefs are trustworthy and built on the rock-solid foundation of Jesus Christ.

I STAND… to show that I am a follower of Jesus Christ.  He is my Saviour and my Lord.  There is NO ONE and NOTHING else worthy of my worship and praise.  If I must bow my knee, it is in reverence and prayer to Him only.  1 Chronicles 16:7-36

I STAND… to acknowledge that the Bible is the inerrant Word of God.  2 Timothy 3:16

I STAND… to acknowledge that “In his heart a man plans his course, but the LORD determines his steps.”  Proverbs 16:9

I STAND… in support of family and to uphold the traditional marriage union between a man and woman in the bonds of Holy Matrimony.  Genesis 2:22-24

I STAND… to acknowledge that I believe in the sanctity of all human life from conception forward.  Jeremiah 1:5

I STAND…to acknowledge that every individual of every colour, race or nationality is a child of God and is worthy of love and respect.  Romans 8:14-17

I STAND…to give thanks to God for the law-givers and public officials who seek to lead, despite criticism and complaint, so that the laws of our land are upheld and respected.  Romans 13:1-5

I STAND…to show patriotic respect for my country’s flag and national anthem.  1 Peter 2:13-17

I STAND… and salute the brave men and women who have paid the ultimate sacrifice for my freedom.  This includes veterans, first responders, police, fire and rescue and the many more exemplary individuals who have put themselves in harm’s way for others.  Isaiah 61:1-3

I STAND…to show my respect.

Who will stand with me?

9 Responses to I Stand to Show My Respect