It All Adds Up

I tweeted this today:

Stephen Hawking was born 300 years after Galileo’s death on the 8th of Jan.

He has died on the date of Albert Einstein’s birth, the 14th of March… and it’s Pi Day…
Seems fitting somehow. #StephenHawking #agreatmind #alostsoul

Two great men have passed away in recent weeks: Reverend Billy Graham and Professor Stephen Hawking.  Both contributed their lifetimes to bettering the world in which they lived.  The difference was that one believed in the God of the Universe, and the other believed in the Universe without God.

BOTH have received their eternal “reward”, with one experiencing all that eternal life can offer with his Heavenly Father, and the other one eternally separated from that same God.

As tributes pour in today for Professor Hawking, there is no doubt that he was a great thinker, a great mind, and a great overcomer of his physical disabilities.  He had a marvelous outlook on life in spite of his limited physical capabilities and he had a great sense of humour.  The world of science has lost one of the greatest theoretical physicists of all time and that is undisputed.  However, despite his great intelligence, Hawking would not allow himself to believe in God, and that is his ultimate undoing. 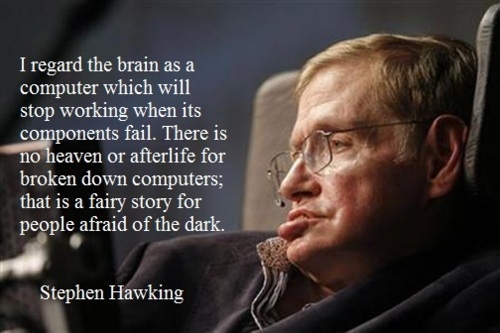 Scripture is clear when it talks about “unbelievers”:

“They are darkened in their understanding and separated from the life of God because of the ignorance that is in them due to the hardening of their hearts.”  Ephesians 4:18

“The god of this age has blinded the minds of unbelievers, so that they cannot see the light of the gospel that displays the glory of Christ, who is the image of God.”  2 Corinthians 4:4

“The wrath of God is being revealed from heaven against all the godlessness and wickedness of people, who suppress the truth by their wickedness, since what may be known about God is plain to them, because God has made it plain to them. For since the creation of the world God’s invisible qualities—his eternal power and divine nature—have been clearly seen, being understood from what has been made, so that people are without excuse.  For although they knew God, they neither glorified him as God nor gave thanks to him, but their thinking became futile and their foolish hearts were darkened. Although they claimed to be wise, they became fools.”  Romans 1:18-22

“Very truly I tell you, whoever hears my word and believes him who sent me has eternal life and will not be judged but has crossed over from death to life.”  John 5:24

Although I rejoiced greatly at the Homecoming that awaited Reverend Billy Graham at the end of his life, I am terribly saddened by the passing of Professor Hawking.  I hope he reconciled himself to God even moments before his passing.  Then today, he would be free of the earthly shackles that bound his body to a wheelchair and his mind to scientific method, and instead, he would have all his questions answered about the universe from the One Who created it!

But that is just wishful thinking on my part.

3 Responses to It All Adds Up