It has been a tough go-round. At one point I was down for the count, but with the help of the entire “Team” in my corner praying and cheering me on, I slowly got back on my feet. Today I am recovering nicely and regaining strength. Unfortunately, it will take a little longer than last time to lick my wounds and come out fighting in Round 3, but God continues to encourage me in His Word and the prayers of the many are my lifeline!

The severe neuropathy pain after chemo was even more challenging this round than the first round. Even doubling up on pain meds did little to alleviate the joint, muscle and nerve pain that would not abate for four days. Basically I was confined to my chair or in bed, moaning, feeling miserable and sorry for myself. I prayed for relief. I expected quick results and was disappointed when the pain lingered longer than I thought I could endure. My dear, sweet husband was on the receiving end of some of my worst moments, when in frustration, I lashed out at him just to vent. I’m definitely not proud of myself for that. No excuses. Thankfully his shoulders were broad enough to shake off my pain-induced tirades, and he calmly talked me down from those cliff edges, and held my hand and soothed my aching heart with his unconditional love. He lives out the “for better or worse” part of our marriage vows everyday. Dear readers, when you pray for me please remember to pray for Charles.

A day after coming out of the chemo “fog”, as I like to call those agonizing days after treatment, my left leg started to swell. I knew the symptoms since I had experienced blood clots in that leg twice before, once in 2002 and again in 2015. I am genetically prone to DVT’s (Deep Vein Thrombosis) on my mother’s side. I have a clotting disorder called Leiden Factor Five as does my oldest daughter. I also have been told that cancer and chemo can also bring about DVT’s. So, I suppose it wasn’t entirely unexpected I would get one again. The fact too that I hadn’t moved much when in pain also contributed to the clot developing. My husband drove me into emergency and a blood test and follow-up ultrasound confirmed my suspicions.

The doctor pushed aside the curtain that separated our little cubicle in the emergency department from the other beds and patients being treated there. He smiled and said, “You are one of the “special” people who gets a DVT while going through chemotherapy!” “Yay, me!” I blurted out sarcastically. It had been a rough twenty-four hours and I had lost my sense of “ha ha”. I had spent several hours the night before at the hospital while they had tried to get blood out of me to confirm a clot. It’s like getting blood from a stone with me. My veins won’t cooperate. Four needle pokes later, my arm looking like a bruised pin-cushion, they finally had drawn enough blood to run the test. Then they gave me a shot of blood thinner and sent me home, instructing me to come back in the morning for an ultrasound to determine where exactly the clot was located in my leg.

It had been a long day already. My husband and I had not had a chance to eat so we went through a drive through on the way home and gulped down our chicken wraps. Halfway home I told my husband that the meal was not sitting well with me. Understatement! No sooner did we get home before I was violently ill with a case of food poisoning! I felt like the cartoon character, Wile E. Coyote, who has anvils dropped on his head repeatedly while chasing the Roadrunner. This just added insult to injury. I survived the night, a little more worse for wear, but showed up the next morning for the ultrasound at the hospital and then the waiting began for those results. Three hours later the doctor was gleefully calling me “special”. Yeah, right.

The doctor then proceeded to tell me the associated risks being on anti-coagulants long term and undergoing chemotherapy. He thoughtfully listed all the medications I can no longer take because of bleeding concerns, including ALL the anti-inflammatory pain meds I had been taking for neuropathy pain. “Uh, excuse me,” I muttered starting to panic, “but how can I get through four more rounds of chemo without pain meds?”

My husband was quick to point out that they hadn’t really worked for me the last two rounds. We had prayed even that very day there would be a better solution to pain management and now it lay in front of us! The doctor suggested a new med and I phoned the cancer clinic to get it okayed.

My Pastor has been preaching a series that focuses on “detours” in life that challenge and shape us into becoming better followers of Christ. I remembered something he said that resonated deeply with me before my second round of chemo. 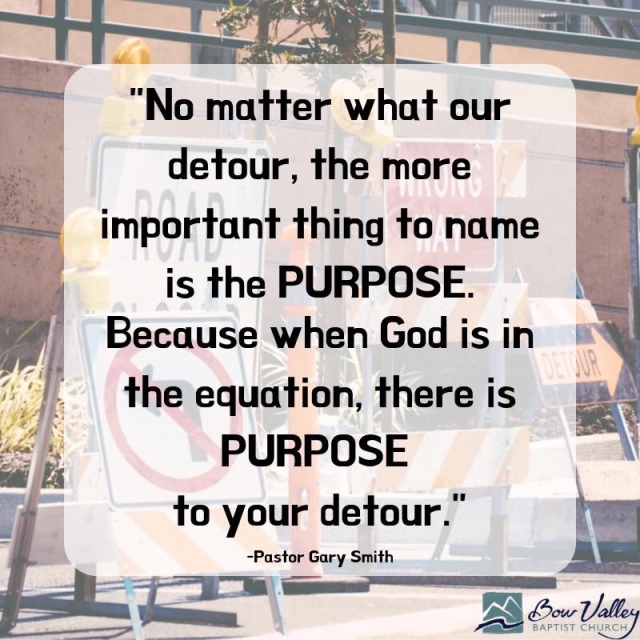 I had thought a cancer diagnosis was my detour, my challenge, in this particular season of my life. I knew God would use my journey in a variety of different ways. My surprise has been the detours within the detour!

I called my Pastor on the way home, my new prescriptions in hand, and told him what had transpired with me over the last forty-eight hours. I was still a bit shell-shocked after all my ups and downs, and as he prayed for me over the phone I started to piece together God’s handiwork in the minute details of my treatment. Next round I go into it with a new med arsenal to help me combat pain. I believe God took that blood clot “detour within a detour” to give me a better way to combat the neuropathy side effect of chemo!

I want to thank so many of you who are following this blog and walking this cancer journey with me by praying and encouraging me with your thoughtful comments of support. Your words have meant so much to me!

14 Responses to On the Ropes