This morning I received word from my cousin in Denmark that my Uncle Johs passed away on Good Friday.  Being the last one of his three brothers and three sisters left, he experienced the loss of both his parents, all of his brothers and sisters (including my mother) and his beloved wife, Grethe, before God finally called him Home.  Though sorry to leave his own children and grandchildren behind, he was more than ready to be reunited with his family in heaven.  He was ready to walk the streets of gold and join the heavenly choir there.

My brother and I are the youngest of the cousins on both sides of the Jorgensen and Kronborg-Nielsen families.  My mother traveled home to Denmark with us when I was only three.  Although I was young, I still have very vivid memories of my time in Denmark.  My most vivid are of the huge family gatherings that included food, drink, and song.  This was a family that loved life!  Any occasion, large or small, was an opportunity to celebrate.  No one could put on a Danish smorgaasbord grander than they could – complete with home-baked bread, rye bread, meats, fresh fish, assorted cheeses, pastries, and Schnapps.  Great laughter, great fun!  After spending hours around the table, they gathered in the front parlor and soon everyone was singing.   They loved to sing!  Many of the songs they sung were original compositions, written by my mother or one of her brothers or sisters.  Accompanied by my mother on the piano, the family sang together like a small choir.  When they sang a capella, the voices were  so pure and beautiful I thought I was in heaven.  It was there in Denmark when I was three years old that I first learned to sing hymns of praise and worship to God.

Many of the great hymns of faith that I know so well now, I heard in Danish first.  I didn’t understand the words then or the meaning behind them at the time, but it didn’t matter,…I loved listening to my mother, aunts and uncles, cousins and grandparents sing them.

It is no wonder that my brother and I grew up to love music.  When we returned back to Canada from Denmark, my mother continued to sing.  She sang when she was happy, sad, lonely, discouraged or anxious.  Singing was life to her.  Our house was always filled with some kind of music.

My grandmother, whom I called “Mormor” (meaning ‘mother’s mother) along with my cousin N-J and his wife visited us in Canada after the death of my grandfather.  It was the first time my mother had seen family from Denmark in over ten years!  Sure enough there was much song and celebration.  Years later, in what can only be described as the “Great Kronborg Reunion of 1979”, at least according to my mother, she was reunited once again with her mother, her sister Nina (and husband Svend), her brother Johs and his wife Grethe, and Johs’ daughter Ulla and her husband, Roland.   For my mother, it marked the largest gathering of  her family together with her since 1961.  What prompted the great exodus from Denmark you ask?…an excuse to come sing at MY wedding!

The day before my wedding I woke up to the sound of ABBA singing “Waterloo” full blast from the downstairs stereo.  In a daze I stumbled from my room only to be met by my Uncle Johs  in his psychedelic “speedos”, who then proceeded to chase me around the house with a wooden spoon while being cheered on by the rest of my Danish relatives.  Then in a spontaneous outburst, they all gathered around me and sang a Danish folk song to me.  I didn’t understand all the words but my mother later explained it was a marriage “hymn of blessing”.

On my wedding day, I asked them to sing this hymn again at the reception. 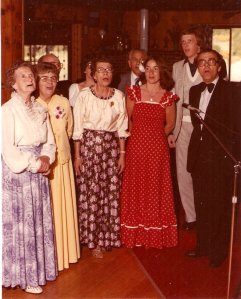 In 1987, my husband, Charles, my daughter Laurelle, who was three at the time, and I traveled to England and we decided to take a detour to visit my family in Denmark.  We stayed with my Uncle Johs in his home, a 200-year-old thatched roof house, and on our last night in Denmark, a great smorgaasbord feast with the entire family was held in our honour.  After the meal we all gathered together and sang.  I had attempted to carry on the tradition of writing a comedic song for the occasion.  As I sang, it was pretty obvious by the hysterical laughter that it was not much of a melody to be sure and the words were pretty lame too, but the heartfelt hug I got from my Uncle Johs for my attempt was genuine!

And so the years have come and gone since then, but the melody of life continues for us all.  So many of my loved ones have passed on.  As much as I miss them with all my heart I know they are all together in heaven and one day I’ll hear their voices again.

Dear Lynn.
This mail is just to inform you, that my dearly beloved father has passed away, and found his Grethe with God. Only 4 weeks ago he was up and alive as always, but feeling tired and coughing from his lungs.  He was hospitalized and they found lung cancer on both sides. (My brother) Bjarne and I was there, when he got the diagnosis, (but) he was so (resolved) about the future and said no to all suggestions about treatments and further testing… I stayed with him till he passed away early Good Friday.
All his friends and neighbors came daily during the three weeks to say goodbye.  I have never seen anything like it, because he was the one who had the peace and determination, while all the others needed his comfort and good humor. He was incredible and all the KRONBORGSK old humor was there. … We sang all the old songs from their childhood, we sang from all the old songs he had (sung) with your mother, (the ones she,) Astrid and Richard (his siblings) had written, and songs we remembered from year’s past.

The last week we took shifts and we (were with him) all the time, day and night, but it became the most happy, beautiful, peaceful and loving process I have ever experienced and he never felt pain or discomfort at any time. …The last day he said, ” Ulla, is it possible to have a more beautiful death?  I don’t think so.”

The heavenly choir gained another voice on Good Friday.

1 Response to Songs of Life