Queen Vashti, for all intents and purposes, was the most beautiful woman in all of Persia.  She was married to the powerful King Xerxes who denied her nothing.  She had all the clothes, jewellery, and riches that any woman could ever want or desire.  In the third year of her husband’s reign, Xerxes decided to throw a party, and not just any ordinary party either; “For a full 180 days he displayed the vast wealth of his kingdom and the splendor and glory of his majesty.” (Esther 1:4)  Then he decided to end the party with a great banquet in the palace garden.  The banquet lasted seven days!  All the nobles and princes from the surrounding kingdom were invited and “wine was served in goblets of gold, each one different from the other, and the royal wine was abundant, in keeping with the king’s liberality.  By the king’s command each guest was allowed to drink in his own way, for the king instructed all the wine stewards to serve each man what he wished.” (vs. 7-8)

In the meantime, Queen Vashti also gave a banquet for the women in the royal palace.  I’m thinking it was a slightly more subdued gathering but no less interesting.  If you’ll allow a little speculation on my part, it was like a great “Girls Week Out” and although it’s not stated in scripture they probably spent a lot of time talking makeup and clothes because it does state later that any woman considered “wife material” for the King “had to complete twelve months of beauty treatments prescribed for the women, six months with oil of myrrh and six with perfumes and cosmetics.” (2:12)  So I’m guessing they spent most of their time giving themselves pedicures and facials, eh?

On the seventh day, the last day of one of the greatest parties that he had ever thrown in his life, “when King Xerxes was in high spirits from wine” (vs 10), he commanded Queen Vashti to be brought before him “wearing her royal crown, in order to display her beauty to the people and nobles, for she was lovely to look at”.  (1.11)  (That’s sort of a given after all the time and energy these ladies put into making themselves beautiful!)

But Scripture says she refused to come and well, do you blame her?

The King and all his party-animal friends had been drinking and carousing for six months and then been on a real “bender” for seven days straight.  When scripture says that the King was in “high spirits”, that was probably a huge under-statement!  It is safe to say that he and his buddies were well spifflicated.  Now I’m just guessing, but I don’t think I’m wrong, Queen Vashti had a feeling that showing up amongst those men dressed only in her golden crown may not be the most prudent thing to do under those circumstances.  So Queen Vashti wisely refused to come to the party…

…But it cost her.  Scripture says that “the king became furious and burned with anger” (vs. 12) because the King and all those other noble husbands thought that she would instigate some kind of feministic uprising amongst the other wives if they heard about her disobedience and perceived disrespect of Xerxes.

The King decided he had to put a stop to this feministic bra burning and forthwith issued a royal proclamation that “every man should be ruler over his own household” (1:22) and to set an example he banished the rebellious Queen Vashti from his sight and set out to find himself a new Queen.  It took him several years but in the seventh year of the King’s reign a young Jewish girl named Esther “won his favor and approval more than any of the other virgins.  So he set a royal crown on her head and made her queen instead of Vashti.” (2: 17-18)

Now it is interesting, that God is not mentioned in the Book of Esther but it is obvious that God had a plan and a purpose to these events from 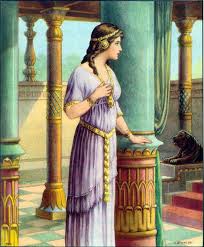 the very start.  Scripture tells us that Esther was raised by her uncle Mortecai because Esther had neither father or mother.  They were exiles, strangers in a strange land and yet God strategically places them both there in that foreign land so that in His timing, Esther may be used to thwart the plot by the evil Haman that would have led to the irradication of the Jewish people.

Now we can only speculate what happened to the poor ex-Queen.  She may have been banished from the king’s sight, but not necessarily banished from the palace.  According to the Midrash, “Vashti was the great-granddaughter of King Nebuchadnezzar II of Babylon, the granddaughter of King Amel-Marduk and the daughter of King Belshazzar. During Vashti’s father’s rule, mobs of Medes and Persians attacked. They murdered Belshazzar that night. Vashti, unknowing of her father’s death, ran to her father’s quarters. There she was kidnapped by King Darius of Persia. But Darius took pity on her and gave her to his son, Ahasuerus (King Xerxes), to marry.

According to the Midrashic account, Vashti was a savvy politician, and the ladies’ banquet that she held in parallel to Xerxes’ banquet represented an astute political maneuver.  Since the noble women of the kingdom would be present at her banquet, she would have control of a valuable group of hostages in case a coup occurred during the king’s feast.”

Scholars argue why Vashti refused to present herself to the King.  Was it political manuevering?  Was it because she did not want to be paraded in front of a bunch of drunken fools?  Scripture does not say, but we do know what the consequence was, she lost her crown and Queen Esther was eventually put in a unique and strategic place of influence with the King.  At the instigation of the king’s chief minister Haman, a decree was issued for the annihilation of all the Jews living in the empire (3:1-15).  This scheme was thwarted by Esther and her cousin Mordecai.  Haman was hanged and a new decree was issued by Xerxes allowing the Jews the right to kill their enemies (8:3-14, 9:5-10, 13-14).

And how, pray tell, does Esther accomplish all this?  Well, take note that immediately upon making Esther his Queen, the King proclaimed a holiday, and what does he do?…He throws another party and “distributed gifts with royal liberality”. (2:18)  This was a King who really liked parties AND royal proclamations and the good Queen Esther likely took special note of that.

So when Esther heard about the plot against her people she took a little time to mull over how she could gain favour with the king, and enlisted her uncle and all the Jews living in Susa to fast and pray for her, knowing that if she proceeded incorrectly she would end up banished like ex-Queen Vashti and then not be in a position to help her people or she would be killed and the entire Jewish nation wiped out along with her.  She told her uncle to “Go, gather together all the Jews who are in Susa, and fast for me.  Do not eat of drink for three days, night or day.  I and my maids will fast as you do….”  (Esther 4:16)

Then she says something that shows that what ever happened next would be entirely the will of God, “When this is done, I will go to the king, even though it is against the law.  And if I perish, I perish.”  Basically she was saying she was willing to be used by God even if it meant losing her life.

Esther was able to approach the king with confidence knowing that whatever happened to her God was in control.  Once she had the king’s initial attention, dressed beautifully in her royal robes, she was already cooking up the most logical way to further gain the King’s favour.  Knowing that he had a penchant for parties and banquets …you guessed it!…she threw him a party!  She invited the king and the dastardly Haman to not one, but two great banquets, and the rest, so they say, is history.

I am speculating but I don’t think I’m wrong when I say that God likely smiled at Esther and then said to Himself,  “I love it when a plan comes together!”

Are you ready to be used by God today?