Stand Up to Bullying!

The Tormentors were waiting for him after school.

Brad Evans, Shane Banister and Cole Smith surrounded him the moment he stepped outside.  He tried to dodge around them but they blocked his escape and Brad hip-checked Tim into the side of the school building, while at the same time slamming his head against the brick.  Tim grunted as the air was knocked out of him and he felt dizzy and sick.

Cole knocked Tim’s backpack out of his hand and Shane kicked it like a football into a snow bank.

Tim cringed as Brad raised a fist to strike him again in the face.  He closed his eyes expecting the punch to land when suddenly he heard a deep voice snarl, “Not on MY watch, mister!”

(excerpt from my novel, “Love the Wounded“)

As most of my readers know, my two previous books, Shoot the Wounded and Heal the Wounded are listed as resources on the largest anti-bullying website in the world www.bullying.org  as is my third book.  My young adult books have a strong anti-bullying message running throughout them.  Heal the Wounded even won a Bronze medal in the 2011 Reader’s Favorite Book Awards.  As much as I am delighted with the accolades, the real reward for me is if in reading my books people will get the anti-bullying message that my books are trying to convey and say, “Not on my watch!” and stand up to bullying in their school, university, or work place.

Today is “Pink Day” in my home town.  All students are encouraged to wear pink to show support for the victims of bullying and to publically say that they are standing up to bullying. 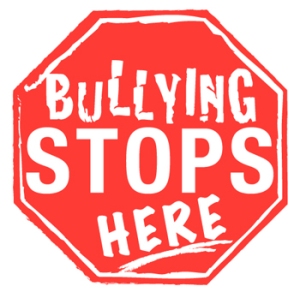 4 Responses to Stand Up to Bullying!