It is no secret that I am a hockey fan, especially during the playoffs.  My heart has been and always will be with the Montreal Canadiens, however living in “Cowtown” (Calgary), it’s hard not to have a small corner of my heart dedicated to the hometown heroes – The Calgary Flames.  So I face the dilemma of whom to cheer for if the Canadiens and Flames should meet in the playoffs.  I guess it will be a win-win for me because whomever wins I’m happy.

One thing I know for sure is: the NHL team with the best beards usually win 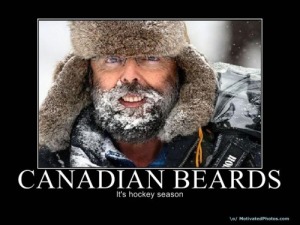 A playoff beard is the practice of a NHL (National Hockey League) player not shaving his beard during the Stanley Cup Playoffs.  The player stops shaving when his team enters the playoffs and does not shave until his team is eliminated or wins the Stanley Cup.  The tradition was started in the 1980s by the New York Islanders.  After the Islanders dynasty ended in 1984, the playoff beard tradition was lost but then was brought back in 1995 by the New Jersey Devils who used the beards.  After the Devils won the Stanley Cup, the beard has been used ever since.  The tradition is also practiced by nearly all North American hockey leagues including university and high school teams.

I am NOT a fan of the scraggly beard look.  I don’t understand the tradition myself but hockey players are a very superstitious bunch of guys.  Silly or serious, superstitions have become a part of the great Canadian game.  The Philadelphia Flyers believed in the winning powers of singer Kate Smith in the 1970’s.  She was their “lucky charm”.  Before a game at the Spectrum, if she sang God Bless America, instead of the national anthem, the Flyers often won the game.  “At one stage, Philadelphia had an incredible record of 62 wins, 13 losses and 3 ties, thanks to the inspiring presence of Ms. Smith.”  Even though Kate Smith passed away in 1986, she is still seen on tape singing before some Flyers’ home games.

Intrigued by hockey superstitions I  decided to do a little research.

“Do they do it to combat the stress or as a moral booster?  Whatever the reason, many (hockey) players are superstitious and cultivate their own rituals and habits, in the belief that this helps them play better.  Even if they sometimes doubt their utility, most players still join in collective team rituals to demonstrate solidarity or conjure up victory. This creates some strange and often obscure sights – to say the least!”  http://www.mcq.org/societe/hockey/pages/aasuperstitions_1.html

Players wear lucky socks or lucky skates and play with what they consider lucky sticks.  They will lay their equipment out the same way before every game, put it on in the exact same order and put it away in the equipment bag in a  particular order after a game.

“When I play, I always put my right skate on first,” a young minor hockey player said, “I tie the left skate first. I tape every stick starting from the tip of the blade, and every stick has to be re-taped after a loss. I don’t cut my hair during a winning streak, and I wear the same shirt under my pads for the entire playoffs.”

The great Wayne Gretsky is quoted as saying, “I always put my equipment on the same way : left shin pad, left stocking, right shin pad, right stocking. Then pants, left skate, right skate, shoulder pads, elbow pads, first the left, then the right; and finally, the jersey, with the right side tucked into my pants.  During the warm-up, I always shoot my first puck way off to the right of the goal. I go back to the dressing room and drink a Diet Coke, a glass of iced water, a Gatorade, and another Diet Coke.”

Goalies are perhaps the most superstitious players of all.  Patrick Roy, the legendary netminder of the Canadiens would regularly talk to his posts during game. When asked why, he answered, “They are my friends.” Also, during the pre-game warm-up, he would skate to blue-line, look at his net, and envision it shrinking. He also never stepped on the blue or red line.”

Other goalies sweep the ice in front of their creases from the left to the right only, or right to left only.  All fans will note that their team may come on to the ice before or after their opponent before a game and after intermissions.  Some teams skate in a certain direction, clockwise or counter-clockwise during the warm up.  The most common ritual is the entire team skating past their goalie before the start of the game and tapping his goal pads with their sticks.

Numbers also play a huge role in the hockey mystique.  Certain jersey numbers define a player just as much as his own name.  If I were to say these numbers: 4, 10, 29, what Montreal Canadien players immediately come to mind?  (Beliveau, Lafleur, Dryden)  Wayne Gretsky wore #99 his entire NHL career. …and yes, there are also lucky and unlucky jersey numbers.

“For the same reason many high-rise hotels don’t have a 13th floor, Colorado College’s hockey team doesn’t have a player who wants any part of the No. 13 jersey. CC, …doesn’t have any players who want to test the age-old superstition that 13 is bad luck, and for good reason. The last two players to have No. 13 for the Tigers fled the jersey like it was on fire. Center Andreas Vlassopoulos tried it as a freshman in 2005 when his preferred No. 3 was taken by Lee Sweatt. About 25 minutes into Vlassopoulos’ first career game, he suffered a season-ending knee injury. He said he decided to give up No. 13 about the time he found out he needed surgery…Dan Quilico wasn’t superstitious, either, and he had always had numbers in the teens. When he got to CC in 2006, No. 13 was available.

“I wanted to do something with my freshman year, try something different,” Quilico said.

After playing in only eight games as a freshman, Quilico broke his ankle the following offseason. He quickly became superstitious and turned in the No. 13 jersey. He wears No. 12 now.”

Hockey coaches are also a superstitious bunch.  Apparently 95 out of 100 coaches do not allow their pictures to be taken before a game because it is considered a bad omen.  They will wear the same tie and/or suit when the team is on a winning streak.  When their team loses, they not only analyze what happened during the game but what may have happened in the spiritual realm to jinx or bless their efforts.

Like other sports, Christian hockey players will pray before a game.  Washington Capitals, Brian Pothier was asked several years ago by a Washington Post reporter what role God had in the sport.  “That’s an interesting question. I’ve heard people say, ‘God’s too busy. He doesn’t care [about sports].’ Then, I’ve heard other views, ‘If God is so great or loves you so much [to help you] to win then what about the guy on the other side who lost? What’s the deal with that? Does he like you more? You win or lose sporting competitions, and that’s fine and it’s part of the grand plan of developing and cultivating who you are as a person. You win some, you lose some, and deal with it. I think it develops who you are as a person and I think God’s in control of that.”

So as I again tune in to Hockey Night in Canada, laugh out loud at Don Cherry’s ridiculous choice of sports jacket, watch with particular interest which team may have the longest beards, and listen to the arena singer belt out “The Star Spangled Banner”  I know for sure who will win the game … all superstitions aside…

…the team that scores the most goals!