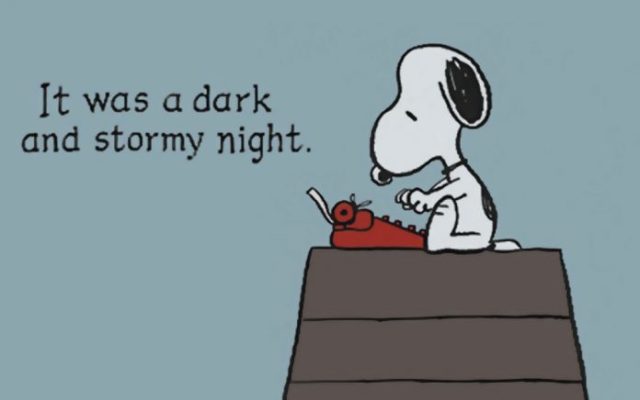 While I was busily writing my third and final book of my “Wounded Trilogy” – Love the Wounded.  It was a bit of a struggle to write, not necessarily because I was experiencing “writer’s block”, back in 2011, but the fact that I could not put a concerted amount of time into writing it.  I was enjoying being a new Grandma and spending as much time as I could with my new Grandbaby, Jaxon.  It was a tough year of distractions, and writing.  I would find myself many times staring at a blank page struggling with choosing the right words.

In high school, my biology teacher, Mr. Slater, called me the “only literary biologist I know”.  I tended to use a lot of unnecessary verbiage to write out my scientific observations.  I suppose, according to him, there were only so many ways you could describe a dissected fetal pig.  Anyway, I couldn’t help but laugh when in the middle of my writing doldrums way back in 2011, I read about the winner of the Bulwer-Lytton “Worst Writer ” award.

The  contest challenges entrants to compose bad opening sentences to  imaginary novels that takes its name from the Victorian novelist Edward George Bulwer-Lytton, who began his Paul Clifford with “It was a dark and stormy night.”

The winner in 2011 was, Sue Fondrie, who described herself then as “a full-time teacher of teachers and part-time awful prose writer”.  It was the first time I had heard of this contest and I will admit it was just the catalyst I needed to complete my book and ensure it was completely and properly edited!

At  26 words, Prof. Fondrie’s submission in 2011 was the shortest grand prize winner in Contest history, proving that bad writing need not be prolix, or even very wordy:

Cheryl’s mind turned like the vanes of a wind-powered turbine, chopping her sparrow-like thoughts into  bloody pieces that fell onto a growing pile of forgotten memories.

Since 2011, I still enjoy checking in to see who the winners are each year.  In 2016, the winner was William “Barry” Brockett of Tallahassee, Florida, a 55-year-old building contractor who has specialized in additions, home makeovers, and bathroom/kitchen remodels for about twenty years.  His winning entry makes me guffaw my way through the expository verbiage of unparalleled mediocrity…(how’s that, Mr. Slater?)

Even from the hall, the overpowering stench told me the dingy caramel glow in his office would be from a ten-thousand-cigarette layer of nicotine baked on a naked bulb hanging from a frayed wire in the center of a likely cracked and water-stained ceiling, but I was broke, he was cheap, and I had to find her.

I thought it might be fun to get the word “juices” flowing and have some of my author/writer friends and writer wannabes try their hand at writing an “awful” opening sentence.  Leave a comment with your sentence, and if I get twenty or more participants, I might even make this into a real contest.

Just like the Bulwer-Lytton contest promised to Sue Fondrie in 2011, I may offer “a pittance” to whoever writes the “worst” sentence here on Journey Thoughts!

2 Responses to Worst Author Ever!