Join Me In Support of the Terry Fox Foundation

A year from now, God willing, I intend to be in Victoria, B.C., participating in the 40th Anniversary of the Terry Fox Marathon of Hope run. I know one of the key organizers of the “Great Canadian Hair-Do” event, and when I told Linda I plan to be there on the Island next year, she asked if I would consider being one of the guest speakers.  I have a year to prepare, but I already know what I want to say.  After two go-rounds with cancer, I am one of the many thousands of cancer patients who have benefitted from the Terry Fox Foundation, through their efforts to create awareness and raise money that goes towards cancer research.  If you look up other cancer charities that vie for your charitable donations, the Terry Fox Foundation surpasses them all statistically in that 79 cents from every dollar raised by the Foundation goes directly to cancer research.  That’s important to me!  I want my children and grandchildren to never have to personally experience cancer in their lifetimes.  I believe in a future where all cancers are once and for all eradicated.  I pray in my lifetime that there will come a day when all cancers are easily treatable and preventable due to breakthroughs in cancer research.  Terry Fox had that dream too.

Would you join me in making that dream a reality?  If you haven’t donated yet, knowing every dollar counts, please support the Terry Fox Foundation this year.  If you haven’t signed up for a run in your city this year, would you set a goal to run in one next year, or join in one of the many other events that support the efforts of the Terry Fox Foundation?

“I was a young bride and studying at the University of Calgary on my way to finishing my education degree.  My husband was going back and forth from Calgary to Comox, B.C. to visit with his mother who was battling cancer.  We did not know that cancer would affect us so much then or later when his mother lost her battle in 1981, my mother would lose her battle with the same disease in 1990, and I would be diagnosed with breast cancer eleven years later.  To say that cancer has touched this family would be a drastic understatement.  It is no surprise then that one of the people I admire the most is Terry Fox.

Terry Fox is considered one of Canada’s greatest heroes of the 20th Century.  Born in Winnipeg, Manitoba in 1958, and raised in Port Coquitlam, B.C., Terry lost his right leg at age twenty to cancer.  Instead of wallowing in self-pity and remorse, the young athlete decided to run from coast to coast in order to raise awareness and money for cancer research.  He began by dipping his leg in the Atlantic Ocean at St. John’s, Newfoundland on April 12, 1980, with the goal of dipping it again in the Pacific Ocean at Vancouver, British Columbia several months later.  He ran an average of forty – two kilometres a day, a unique running style evident in a hop-skip approach that took tremendous effort and stamina to maintain the grueling pace.  No one had ever done anything similar to the task Fox was under 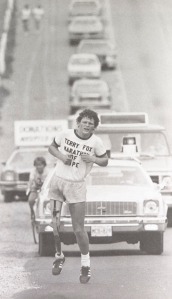 At first there was little media attention for the young runner, and his “Marathon of Hope”  but slowly and surely word of the courageous young man began to spread.  It began as idle curiosity and then spread to admiration across Canada.  Communities welcomed him and others began to prepare for his arrival.  It was like a national cheer or wave starting at the east coast and spreading to the west.

I remember watching the news reports and catching the “wave” with millions of other Canadians who cheered on his progress.  Terry and I were the same age and I marveled at his determination and strength.  Then on September 1, 1980 just north-east of Thunder Bay, Ontario after 143 days, running 5,373 km. (3,339 miles) through Newfoundland, Nova Scotia, Prince Edward Island, New Brunswick, Quebec and Ontario, Terry was forced to abandon his run.  Cancer had spread to his lung.

I remember the interview he gave so vividly as I watched the news on T.V. that day.  His voice was hoarse, arms crossed over his chest as he lay on a stretcher, tears in his eyes; he promised he would return to the run as soon as he was able to.  Terry had raised $1.7 million dollars for cancer research during his run.

Unfortunately Terry died on June 28, 1981 at the age of 22, one month before his 23rd birthday, but not before becoming the youngest person ever to be awarded the Order of Canada.

Fox’s heroism inspired other Canadians to similar feats in the name of charitable causes.  Steve Fonyo, another runner who had a leg amputated to cancer retraced the same route as Fox and completed the run in the name of cancer research.  Rick Hansen, a paraplegic athlete, made his own trek around the world in his wheelchair to raise funds for spinal cord injury research.

In 1982, British singer/songwriter, Rod Stewart, wrote the song “Never Give Up On a Dream” as a tribute to Terry’s Marathon of Hope and proceeds from the song went towards cancer research.

Terry’s goal was to persuade every Canadian to donate one dollar for cancer research.  Now the run has become a global event with over two million people running world-wide in organized Terry Fox Runs.

I’m not a runner, I’m a writer, but if I can help raise awareness through this blog, I will have done my part.  I encourage my readers to click on this link and generously donate to the Terry Fox Foundation  today.”