Gratefulness is the Key – Guest Posting by Brooklyn 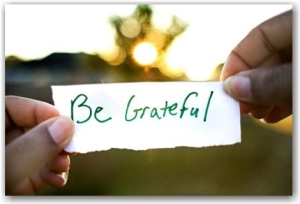 The scent of Christmas was in the air. Carols were loudly playing on the living room TV and colorful lights were hung up all around the house. I sat happily next to my two siblings, in front of the towering Christmas tree which held ornaments that my mother had received at ornament exchanges with her small groups. My heart was thumping wildly in my chest, threatening to burst out of my thin frame. Christmas only happened once a year and it was always the most exciting time. I always got to see relatives I didn’t see very much, I got to drink eggnog and make snowmen. But to me, the best part of Christmas was tearing the sparkly wrapping paper from boxes which held presents for me.

Soon a large box sat in my lap and I fingered the red bow on the top. My mom, who likes all of the kids to open the presents at the same time, announced that we could open our first present. So I tore off the blue penguin paper and reached inside to reveal a plush doll. I glanced over to see what my sister had received. In her hands was an adorable stuffed bear. Jealousy bubbled ferociously through me as I threw my doll to the ground. Why did my younger sister get something so much better than me? I planned to ask to trade her my doll for her stuffie.  She was young so she would probably absent mindedly give the stuffed animal to me if I played my part right.

What I didn’t know was my doll was the type of doll that you could register onto the computer and play games with it and buy it clothes.  I felt so dumb; acting like my life was over because I was envious of something my sister got. The doll was an awesome gift that I loved to death and used a lot.

I was foolish to be jealous of what my younger sister had gotten, when I had gotten an awesome gift too. I should’ve been grateful for what I had received. In fact, I should’ve been happy for my sister who had, in the end, shared with me because she saw how I admired her stuffed animal.

Hope you enjoyed my story!

Brooklyn is a seventh grader who enjoys dance and gymnastics. She can often be found practicing gymnastics skills or showing off to her younger sister in her living room. Brooklyn also loves playing with her dog and hanging out with her two BFFs.