I received a wonderful surprise in the mail the other day!  My very own personalized “Pennyware” bracelet!

I wrote a blog several months back entitled “No More Pennies from Heaven” about the demise of the Canadian penny and it really struck a chord with one reader.  Penny Allen, aptly named don’t you think? 🙂 emailed me and said she was saddened that the penny would no longer be in circulation and she wanted to thank me personally for writing a blog that had touched her heart in such a profound way.

A budding jeweler, Penny lives in British Columbia and has turned her passion for pennies into a little business where she creates jewelry out of the little coins.  She asked me to list a few years that are particularly meaningful to me in my lifetime, and my birthdate as well and then she fashioned my own unique and most meaningful PennyWare bracelet.

My own personalized PennyWare bracelet.

Along with the bracelet, Penny also sent along a letter that described the coins in great detail:

“The beads are carnelian, which is an alternate birthstone for August, (my birth month).  “Carnelian is an uplifting yet stabilizing stone, and an excellent all round healing stone.  It has high energy and is great for restoring drive and energy.  Carnelian can release stress and trauma and can be worn for confidence, courage and protection from harm’.

“The 1992 coin is a commemorative edition celebrating Canada’s 125th birthday – the date reads 1867 – 1992.  I did not include a penny from your birth year because it would have made the bracelet too long, and I thought the other years were the most important ones to you.”  (She was right!)

“You can shine up pennies several ways, a paste of salt and vinegar works quite well as does one of those jewelry cleaning cloths you get for polishing silver.

Very best wishes for your happiness.”

Penny is just starting out on this new jewelry-making venture for now, but if you are interested in getting your own PennyWare jewelry, contact Penny at misspenn@shaw.ca for all the information and cost.  She makes earrings and bracelets and necklaces as seen by the photos below: 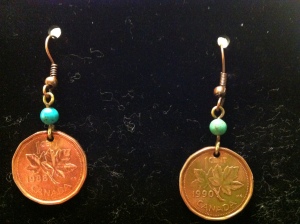 As for me, I want to thank her so much for a “penny” bracelet that I will always cherish!