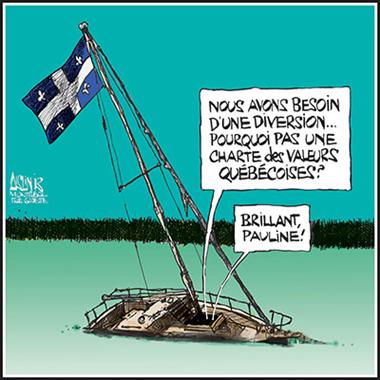 For my readers who are not Canadian, this may or may not be unsettling for you.  For those of you who are unaware of Canada’s “divided” status, you might actually be shocked at the fact that we have a “separatist” government nestled nicely in Quebec, but the province itself is still under Federal or National jurisdiction so to speak.  Yeah, it’s wonky, but that’s the way it is.  It’s like having Benedict Arnold sitting comfortably in the middle of all the Knights of the Round Table.  He doesn’t like anything the other knights are doing, and doesn’t want to cooperate with them in any way, but the other “knights” won’t kick him out because they “need” him so there’s not an empty seat around the table.  (I’m definitely showing my Albertan “red-neck” side with that last statement) 🙂

For those of you who do not know, Canada is a bilingual nation, with French and English being the two official languages.  Now I don’t have a problem with that per se, however, when a separatist Benedict Arnold is the only one at the table speaking French, and refuses to allow the other provinces (knights) to speak anything else but French around them, then I have a little issue with bilingualism.  Benedict has thus become a standoffish bully and…well…you know how I feel about bullies!

The latest in separatist Benedict’s, (I mean Premier Ms. Marois’) bullying tactics is a new Quebec Charter of Values that would see all civil servants be banned from wearing any kind of religious symbol. “The plan would apply to judges, police, prosecutors, public daycare workers, teachers, school employees, hospital workers and municipal personnel.”  “One justification given for the supposed need for a values charter is that some instances of religious accommodation have given rise to a “profound discomfort” in Quebec. Yet what there has been of these have been piddling instances, blown out of proportion, over parking exemptions on religious holidays or specialty food served at a sugar shack.”  (Editorial: Montreal Gazette)

The ban would be against hijabs, kippas, turbans, Crosses, the Star of David, etc., and, in my personal opinion, goes against the whole idea of religious freedom we hold so dear here in Canada.

The controversy surrounding this new Charter of Values in Quebec is substantial with supporters and opponents on both sides.  It has surprisingly unified Muslims, Buddhists, Christians and other faiths who are crying “unfair” because they are unable to wear jewellery or clothing that identifies themselves with any religious organization, cult or faith.

I wonder if bumper stickers, magnetic ribbons and those awful “stick family” figures in the back windows of cars will also be subject one day to this Charter?  I mean, where does it end?  I know people who value their sport’s team, or their pets, or their homes, cars, music even more than they do their god.  Will all that fall under a ban eventually too?  I mean will it one day be against the law to show off the colours of your favorite hockey team because it may offend another sports fan who doesn’t share your “belief” in that team.  See how ludicrous this all is???

It will be an interesting time of debate over this new Canadian controversy.  Perhaps it’s time for the good people of Quebec to oust this particular separatist Benedict Arnold (in this case, Premier Pauline Marois) and allow her to go fight stupid crusades like this on her own.  I would certainly like to see Quebec become that gallant “knight” it once was around the Federal round table.