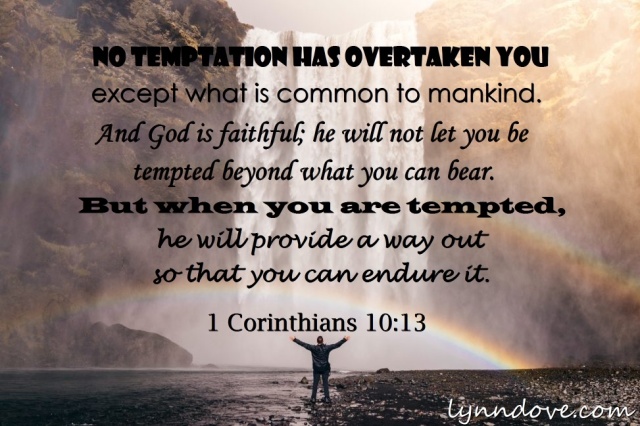 I cringed when he said it.  He was using the verse to strengthen his argument but although his intention was good, misinterpreting Scripture, and using it out of context, hindered the point he was trying to make.  On Journey Thoughts some of my most popular posts are 25 Encouraging Verses that are topical in nature.  I am delighted people turn to these posts so frequently, but I also encourage people to READ THE VERSES IN CONTEXT to get the full meaning of the text!

Many times we don’t even realize we’ve put our own “spin” on Scripture until it’s pointed out to us.  This has prompted me to write a series of blogs on some of the most popular Bible verses that are often misused or misinterpreted.  The first one being the verse that had me cringing last night:

“No temptation has overtaken you except what is common to mankind. And God is faithful; he will not let you be tempted beyond what you can bear. But when you are tempted, he will also provide a way out so that you can endure it.”  1 Corinthians 10:13  (NIV)

Other translations read: “He will not allow you to be tempted more than you can take.” (NLV) or “He will not let you be tempted beyond what you can handle.” (The Voice) or “he will not let you be tempted beyond your ability.” (ESV)  I focus on that little phrase within that verse because that’s what trips up more people to misunderstand this entire passage.  Many people use that verse to claim that God will not allow them to face anything that’s too difficult a task.  Or they take comfort knowing God will not allow them to be “tempted” or “tested” beyond what they are able to handle.  The problem with that interpretation is that in my experience, God DOES allow people to be “tested” and/or “tempted” way beyond what they can bear.  If this were not so the Apostle Paul is contradicting himself when he says in 2 Corinthians 1:8 “We do not want you to be uninformed, brothers and sisters, about the troubles we experienced in the province of Asia. We were under great pressure, far beyond our ability to endure, so that we despaired of life itself.”

I think about my young friend, a mom with three children, who is fighting Stage 4 metastatic breast cancer.  Another friend, who is grieving the loss of her precious son to suicide.  There are people who are picking up the pieces after a tornado ripped through their neighbourhood in Ottawa.  More often than not, I hear about people going through the most difficult of times and I know it is way more than they can bear.  When I was diagnosed with breast cancer in 2001, I faced a situation I could not handle…on my own.  The misinterpretation of that verse makes people question God, and decry the unfairness of life.  Why does God allow bad things to happen?  He promised we would never face more than we can bear!

Read the Scripture in context to glean its full meaning.  Paul in 1 Corinthians 10, is warning the church, using Israel’s past history to prove his point, that they will face all manner of temptations but as long as they anchor themselves to God He will give them the spiritual strength to handle whatever they may face.  God will not allow any temptation to come their way that they are unable to resist.  The entire passage is about temptation and the fact that people fall into temptation when they are being disobedient and rebellious.   Verse 12 warns: “So, if you think you are standing firm, be careful that you don’t fall!”

Sin is insidious.  When people are not following God, when they insist on going their own way and not obeying God, sin, disguised as temptation, will lure them in.  Verse 14 says the solution to being tempted is to “flee” but if we ignore that advice and instead succumb to temptation, God will, in His mercy, help us by providing a way out.  He will ask us to repent, to be restored to a right relationship with Him first.  Leaning on Him, we can endure the consequences that follow as a result of our disobedience.  He won’t remove the consequences, but He will give us the strength we need to handle them.

The promise is not that God won’t let bad things happen, but when they happen, we are to trust that God is bigger than any problem, trial, or temptation we may go through in life.

Be encouraged, friend.  Are you feeling tempted by sin’s pull?  Flee!  God’s got your back!  With His help you can overcome any temptation.  Have you already fallen into temptation?  Don’t be disheartened.  Face the consequences, repent and ask God’s forgiveness.  God will give you the strength you need to endure.

“So do not fear, for I am with you; do not be dismayed, for I am your God.  I will strengthen you and help you; I will uphold you with my righteous right hand.”  Isaiah 41:10